Let's Get Things Straight! The Truth about True Ortho

We in the aerial survey industry throw phrases like “orthorectification”, “aero-triangulation”, and “auto-correlation” around, expecting or assuming the rest of the world to know what we are talking about.  I guess it is the same in most industries; we all have our specific words and phrases, so perhaps I should start from the beginning.

When I talk about aerial survey, I am specifically talking about aerial photography from a piloted fixed wing aircraft. Over recent years this has become commonplace thanks to, for example, Google Earth and Bing Maps, despite many users assuming it is all satellite imagery.  It has also been overshadowed by more exciting sensors like LiDAR, hyperspectral, infrared and, dare I say it … UAVs (or drones).  Aerial surveyors fly around the country taking many hundreds of thousands of aerial photos with specialized, and very expensive, survey cameras.  These photos are then the raw materials for a host of other derived products, which are used for applications as diverse as map making, urban planning, flood modelling, and wind farm modelling.

Each individual photo (which is over 1GB in size as the camera is 262 megapixels), overlaps the previous photo enough to allow us to view in stereo (or 3D). The overlap is usually between 60 percent and 80 percent).  Using mathematical calculations from information collected on the camera about the position and the tilt of the aircraft, we triangulate the photos (I won’t go into details). But in a nutshell, this process turns each photo into a “map” by putting it in its correct geographic location.  This is known as an orthophoto and is the sort of thing you see on Google Earth or Bing Maps; they are not one big satellite image, they are made up of many thousands of individual aerial photos, stitched together.

One of the most complex aspects of the process of orthorectification is the removal of the distortion caused by the surface of the earth or terrain (this can get complicated, but if you imagine that the top of a mountain is closer to the camera than the sea is, this causes a scale distortion). Also, the center of the image is directly below the camera, whereas the edges of the photo are viewed at a very slight angle, again causing a distortion.

We remedy this by creating a digital terrain model (DTM) from the overlapping images and use that to remove the distortion caused by the shape of the ground (hills and valleys). 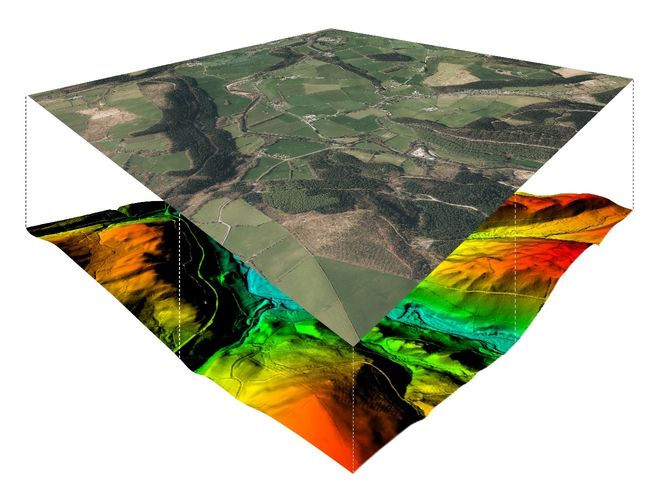 This process removes distortions caused by hills and valleys, but doesn’t do the same for buildings as toward the edges of the image they are viewed slightly from the side, e.g.: 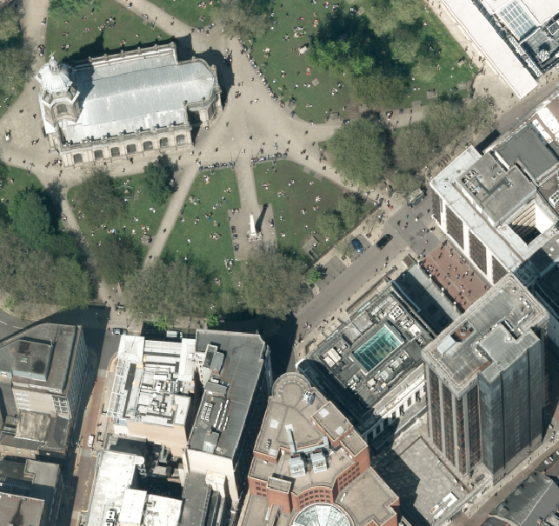 This is commonly known as building lean, and has historically been very difficult and expensive to remove in aerial photos, especially on a wide scale. The main problem with building lean is that the top of the building is displaced, which can obscure the ground and detail behind the building. This gets worse as the building gets taller. Another issue is that the tops of buildings are not in their correct geographic location when compared to a 2D map.  This often limits the use of an ordinary orthophoto in urban areas. They are frequently just used as a “backdrop” image.

With advances in camera and processing technology, all that has changed.  Newer digital survey cameras, such as the UltraCam Eagle, are so accurate and clear with better positioning technology and optics, that we can now create detailed height models that include buildings and trees as well as hills and valleys.  We have now moved from creating Digital Terrain Models (DTM) to creating Digital Surface Models (DSM) as standard.  Because of the improved camera technology and the fact the cameras are digital, it is possible to increase the overlap from 60 percent to 80 percent, or even to 90 percent with no extra flying cost.  With this much overlap, each point on the ground is photographed multiple times and the correlation between pixels is greatly improved. These resulting DSMs are so good and computers so powerful that they are able to correct the displacement of individual buildings as well as the hills and valleys as in ordinary orthophoto.  This level of distortion correction is known as “true ortho”.

True Ortho is not a new concept, but it has been, until now, a manual and highly specialized process, therefore prohibitively expensive for most surveys, and has remained in the realm of the expert. This new technology unlocks the potential of True Ortho for all users.

I’m sure you’ll have found all this very interesting, so hopefully you’re now asking yourself “how does this help me?” Well …

The removal of the obscurations (obscuring buildings and other manmade features) reveals more of the photo and so every single object (including roof detail) is in the correct position. We can now use the orthophotos for more accurately creating and updating topographic maps and urban plans. Streets, utilities, street furniture, sidewalks and other similar features are revealed, and thus mapping, inventory and asset management is improved significantly.  The image itself is more pleasing aesthetically, and can be regarded as a bona fide 2D map.

In addition, the DSM which is essentially a by-product, is a highly useful dataset.  Its applications are many and varied including conversion to a 3D mesh and creation of 3D city models, which are now widely used in urban modelling, planning, line of sight and flood assessment. Never before has the earth’s surface, both natural and manmade, been so easy to visualize in 3D across such expansive geographies.

In summary, aerial survey and orthophoto production has changed for the better, with no increase in acquisition costs.  The resulting true ortho images are now being more widely adopted as the standard, as they can now for the first time be truly coincident with equivalent vector mapping.  The DSM produced simultaneously is also feeding new and novel applications in sectors from insurance to renewables and security to tourism.

If your aerial photos still have building lean, you’re not seeing the full picture. It's time to consider a new survey!

Important: To be recognized as a MALSCE member you must login using your MALSCE assigned username and password.

Registration is processed through the MALSCE associated website, www.engineers.org. MALSCE is supported by the staff of The Engineering Center Education Trust.

Please note: Altering your name or contact information during registration may overwrite your record in our membership database and prevent you from receiving your member benefits.

If you have additional questions regarding registration, please contact us at 617/227-5551 or malsce@engineers.org.