Scott Cameron, PLS, Testifies in Support of S. 1392 before Massachusetts Legislature's Joint at Committee on Public Safety and Homeland Security 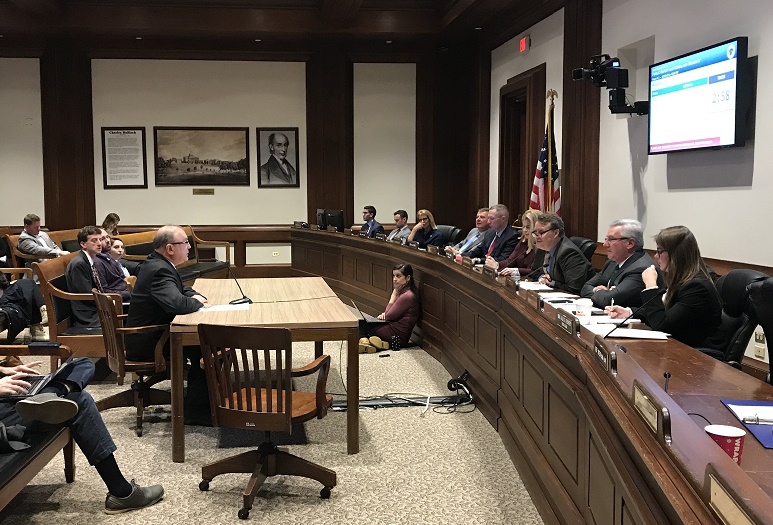 Scott Cameron, PLS, testifying before Joint Committee on Public Safety and Homeland Security for MALSCE and ACEC/MA in support of S. 1392, An Act Relative to Public Safety in Excavation on December 17, 2020 at the Massachusetts State House in Boston.

On December 17, 2019, MALSCE leader Scott Cameron, PLS represented MALSCE and ACEC/MA to testify in support of S. 1392, An Act Relative to Public Safety in Excavation before the Joint Committee on Public Safety and Homeland Security.       Link to Scott Cameron's Testimony  The committee is not expected to “executive session” to issue its recommendations, determining the next action on this bill until January 11, 2020.

Sample letter to send to the Co-Chairs of the Joint Committee on Public Safety and Homeland Security before January 7, 2020

• If you are a constituent of either chair, be sure to note that in the letter/email.

As noted above, S. 1392, An Act relative to public safety in excavation had hearing before the Joint Committee on Public Safety and Homeland Security on December 17, 2019 at the Massachusetts State House,

We are expressing support for: S. 392, An Act relative to public safety in excavation

The House version of this bill: H.2815, An Act relative to improving public safety in excavation, was reported out favorably from the Joint Committee on Telecommunications, Utilities and Energy in late July. The bill is now in the House Committee on Ways and Means.

You can send a similar letter to the Chair of the House Committee on Ways and Means in support of H.2815, An Act to improving public safety in excavation and copy Your State Representative on the letter, following the instructions above

Please reach out to your state legislators now, based on where you live/vote and ask them to support favorable action on the bill. Let them know that this is important for public safety, climate resiliency projects, your town and your professional practice.

To reach your legislator's State House office to call, schedule a local meeting or find out when they next have local office hours, click here.

To view the fact sheet on the bill from our May 2019 Engineers and Land Surveyors Day at the State House, click here.

This MassDOT directive supersedes E-11-003 and outlines the requirements and procedures for the preparation and submission of Utility Plans by designers with each design review submission.

The primary change from E-11-003 to E-19-004 is that Utility Plans shall now be submitted by the designer on a single CD or thumb-drive instead of on multiple CDs.  The State Utilities Engineer will then distribute the plans to the Utility/Railroad Companies electronically using Bluebeam, an FTP site or other viable method.  The Utility/Railroad Companies will continue to submit any comments/edits directly to the State Utilities Engineer.

This Engineering Directive will be effective January 1, 2020.

On October 11, 2019, the DPU issued a ‘Straw Proposal,’ which “represents the Department’s analysis of the comments received and establishes specific criteria for the use of professional engineers in relation to natural gas engineering plans, work, or services that could pose a material risk to public safety.  In particular, the Straw Proposal delineates how natural gas companies are to use professional engineers on complex projects and defines the types of complex projects that warrant the use of professional engineers.  The Department may initiate a formal rulemaking proceeding after reviewing the comments submitted pursuant to this Order.“

The original Straw Proposal, the DPU order on this matter and comments received on this matter through November 11, 2019,  can be found in the DPU electronic file room. See below for instructions.

To see the comments received through the November 11, 2019 reply comments period, Go to the DPU Filing Room  then click on Dockets/Filings, then choose Dockets by Number, Then enter Docket 19-34

December 3, 2019, Sammy Nabulsi, Chair of the Boston Municipal Lobbying Compliance Commission visited with ACEC/MA's Government Affairs Committee. We appreciated his time and willingness to focus on the issues of concern to design professionals.

He indicated that the Commission voted to approve a final set of proposed regulations that are currently being reviewed to develop a small business impact statement.  The Draft regulations will be posted in mid-late December and then there will be a public comment period for at least 21 days after notice of the regulations posting, plus a public hearing in the first few weeks of January when people can provide input.  The Commission will then review where it needs to make changes, if necessary.  They will then vote on  final set of regulations and issue a fiscal impact statement, so that the City can budget for any additional staffing needed. He noted that there are certain things the Commission cannot change because of how the City Council wrote the ordinance. For example the Commission cannot change the fact that reports need to be submitted quarterly because of the way the City Council wrote and passed the ordinance. The City Council can make these sort of regulatory changes, and might in the future, but it doesn’t look like they will revise their ordinance in the near future.

People can email their own questions about their own individual work to lobbying@boston.gov

The Commission plans to issue formal bulletins, such as the one above, as needed.

In general, the filing of any application for a permit is not considered to be a lobbying activity.

Any interaction with the city in the course of responding to a procurement, if pursuant to the city's actual process, including interviews, would not be considered lobbying

If a firm is trying to get a contract outside the city's contracting process, that would be considered lobbing.

If a firm is under contract to give advice to the city, that firm would be exempt from having its employees register as lobbyists for work done under that contract.

When in doubt about whether you need to register as a lobbyist with the City of Boston, ask the question at lobbying@boston.gov

On 4/17, the City launched a registration portal for lobbyists in Boston. Boston's municipal lobbying ordinance aims to further promote good governance and transparency in the city and requires lobbyists, lobbyist entities and lobbying clients to register with the Boston City Clerk's Office.  Additional information and registration fees are available online.

MALSCE's External Affairs Chief and ACEC/MA Executive Director Abbie Goodman is working in coalition with NAIOP on issues of concern to design professionals.

Here's a copy of the letter and the legal memo that the coalition delivered to Mayor Walsh and Boston CIty Councilors several months ago.

Action Requested: If you live/vote in Boston, email Abbie Goodman with the neighborhood city council district where you live for grassroots efforts. Link to check your Boston City Council District

The Boston Lobbying Ordinance uses a very broad definition for lobbying that may include some work done by engineers, land surveyors and other design professionals working on public and private sector projects in Boston. ACEC/MA, working in coalition with the Massachusetts Nonprofit Network, Greater Boston Real Estate Board, NAIOP and others, is seeking clarifications and guidance on this issue that it will share with MALSCE leadership.

Background: On July 25, 2019, the Baker-Polito Administration filed a transportation bond bill seeking $18 billion in additional capital authorization to invest in building and modernizing a transportation system that meets the needs of residents, businesses and cities and towns statewide. The authorization would be used to fund existing programs as well as several new initiatives designed to lessen impacts from roadway congestion and ensure reliable travel throughout the Commonwealth.

The bill had a hearing before the Joint Committee on Transportation on October 8 at 10 AM at the State House.

The next meeting of the Board of Registration is on December 19, 2019 at 9 AM. I will update this page after that meeting.

-  The Continuing Professional Competency language is still under review internally at DPL.

-  The draft clarification language regarding the Use of the Title Engineer has been provided to DPL staff for review.

-  DPL staff held an internal meeting regarding the update of "Professional Practice, A Guide to the Practice of Architecture, Engineering and Land Surveying in Massachusetts." Board members Paul Tyrell and Paul Tsang are providing comments on the updated draft before it is released as draft to the public for comment.

- Draft clarification language intended to provide guidance on 250 CMR 5.01 (2), especially 250 CMR 5.01 (2) (a) is being reviewed by DPL Senior Management. The issue is related to performing survey work incidental to engineering work and limitations, as well as draft frequently asked questions (FAQs) regarding a Civil PE certifying site plan which references a property line determination that was previously completed by a PLS. The board will continue this discussion at the January meeting.

- NCEES Enforcement Exchange Report: This report list actions taken by other boards of registration that resulted in penalties (fines or other actions) against licensees in other states. The DPL

During the December 19 Board of Registration meeting, the board expects to focus on reviewing the many applications for licensure that typically arrive for this meeting.

For the January 2020 meeting, issues will probably include:

As a reminder, these are additional steps on continuing professional competency regulations:

Opportunities to Serve on Boards and Commissions

Professional Engineers, Professional Land Surveyors, Registered Architects and other Design Professionals living in and licensed in Massachusetts are sought after to serve on certain public boards and commissions created under state law or by regulations. This is an opportunity to participate directly in government, by providing your professional expertise to help shape public policy for the benefit of residents. For more on serving and how to apply, see this link: https://www.engineers.org/get-involved/public-boards-commissions

Important: To be recognized as a MALSCE member you must login using your MALSCE assigned username and password.

Registration is processed through the MALSCE associated website, www.engineers.org. MALSCE is supported by the staff of The Engineering Center Education Trust.

Please note: Altering your name or contact information during registration may overwrite your record in our membership database and prevent you from receiving your member benefits.

If you have additional questions regarding registration, please contact us at 617/227-5551 or malsce@engineers.org.